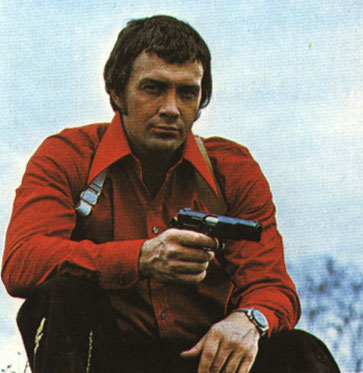 Going back to his grandfather, in the 1920s, Peter's family have had a long-standing relationship with Britsh Intelligence. Following the disappearance of Peter's grandfather in 1945, British Intelligence stepped in to take care of his 10 year old son Gregory Trevelyan (Peter's father) and put him through school at Eton. In the early fifties Gregory came to the attention of E Branch when psychometric tests marked him out as possessing an ESP talent, albeit at a relatively low level by today's standards. But back then, he was considered a rare find indeed and was soon squirreled away by E Branch.

When Peter was born he too was put through school by the government, eventually attending Sandhurst in 1977 before joining the Blues & Royals Regiment. During his time in the regiment, Peter saw several tours of duty both in Northern Ireland and Germany. Throughout his education and time in the army, Peter was monitored by both E Branch and MI6 with a view to his potential as a future recruit. Given his military training, superior marksmanship and his position as one of the most promising boxers in his regiment it at first looked likely that he he would end up being recruited by MI6 for a wetwork detail. However, E Branch decided to have a final look at him and sent two operatives, a telepath and a spotter, to interview him.

That interview changed the course of Peter's life. While the spotter was able to indentify Peter as having a markedly strong ESP talent, though without being able to account for why he'd not picked up on it during previous encounters, it was the telepath who was able to explain Peter's unique talent. Not only was Peter himself a spotter, but he was different from those previously recruited by E Branch. Unlike them, Peter's talent was not constantly active which resulted in it being much more focussed when he did choose to use it. As a result, not only was he himself not always detectable by other spotters but, if close enough, Peter could actually perceive the exact nature of another ESPer's talent! The interview ended swiftly and Peter was immediately placed on a nonspecific detached secondment within the MoD, under the auspices of E Branch. Following further testing, orientation and training in basic tradecraft, he was handed his first field assignment in 1982 to investigate the mysterious death of the Conservative MP for Rye.

Oversexed and with a very dubious, if patriotic, taste in underwear. Peter is incapable of forming any long term relationships with women given his predatory and promiscuous predilictions. Beyond this he displays aggressive, brash and brutally ruthless tendencies. What Peter lacks in social graces and charm he more than compensates for in self-confidence in his own abilities and, when mere bravado and an intimidating force of personality fail to resolve a situation, he resorts to violence. Such violent episodes are particularly notable for their uncompromising savage ferocity - regardless of the nature of the threat being dealt with. Whether using his lovingly polished pair of silenced Glock 9mm semi-automatic pistols or his fists, with which he is almost as deadly, Peter never flinches from his murderous intent. To date this has served Peter well, saving his life and that of his fellow operatives on many occasions. However, this does mark him down as a potential risk for the future...